This year, for the first time in Pakistan, Google introduced its student developer community — Developer Student Clubs. Developer Student Club (DSC) is a Google Developers program for university students. It is a Google community designed to help students build their mobile and web development skills and knowledge. Up until last year, DSC was only limited to a handful of countries in Asia and Africa.

Google opened DSC applications for Pakistan in April 2019. Thousands of students applied, but only some of them got an interview email from Google. Muhammad Saad, who studies Computer Sciences at the University of Engineering and Technology (UET), was one of the shortlisted candidates. On the morning of July 26, 2019, he received the good news that he would be leading the Developer Student Club at his university.

Saad began his activities as the DSC Lead as soon as the university opened for the fall semester. The first thing that he did was that he organized an info session on the Developer Student Club on September 11, 2019. 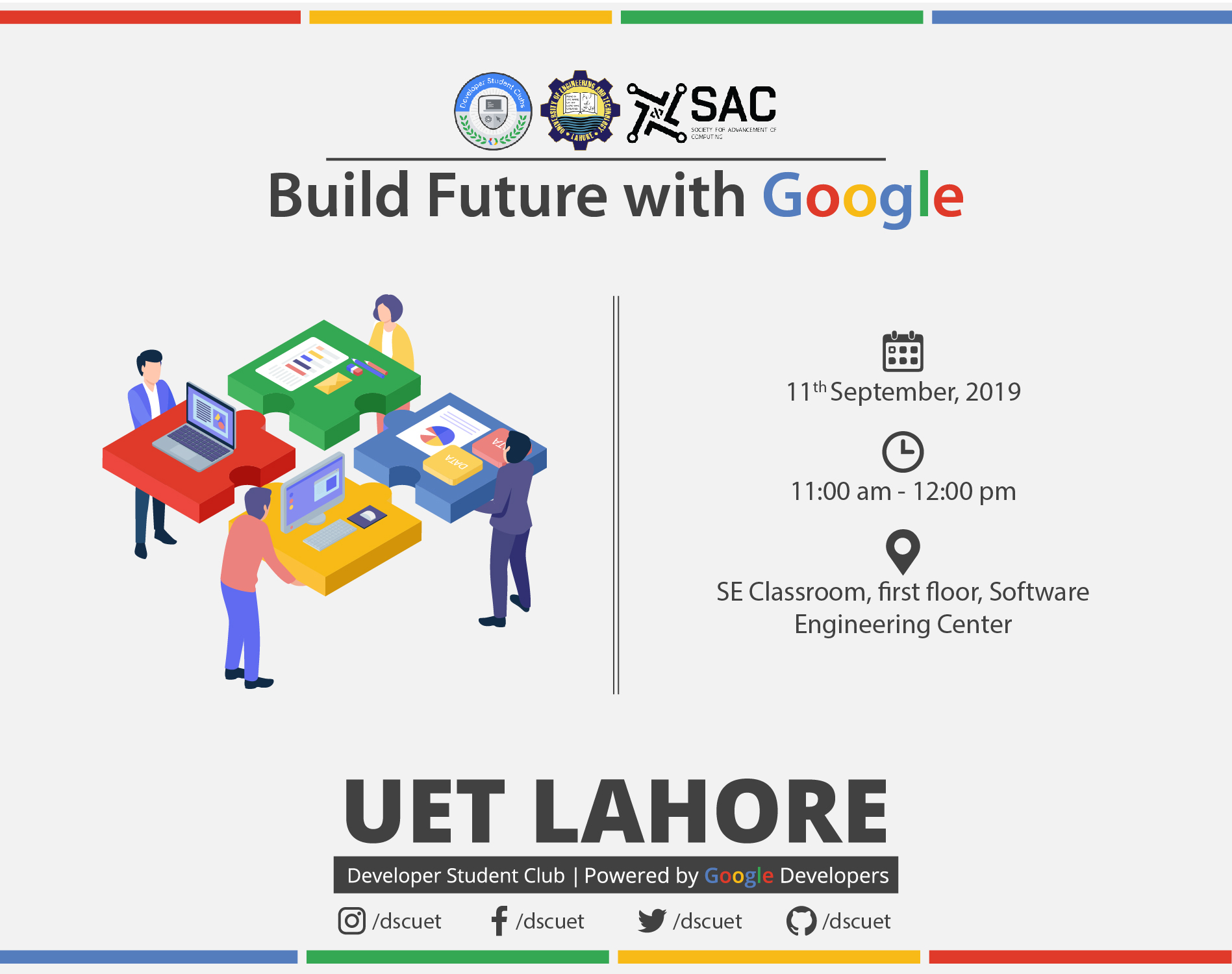 The info session took place at 11:00 AM in the Software Engineering Center at UET, Lahore. Around 70 to 80 students attended it. Most of these students were from the Department of Computer Science and Engineering and Electrical Engineering Department. Saad led the session and explained everything about DSC to them.

Like a good speaker, Saad first introduced himself to the audience. He told them that he is currently a sophomore studying Computer Sciences at UET. Some of the key points of his introduction were:

No one really knew about DSC as this is the first time Google has introduced it in Pakistan. Considering this, Saad started his talk by explaining to the audience what DSC is, what we will do in it, what we will focus on in this community.

Saad started by explaining to the audience that DSC is one of the developer communities of Google. It is under an organization — Google Developers. The DSC Leads are directly connected to Googlers who are working in Google Developer Relations. He also made this clear that DSC is a community where any student who has an interest in development can come and learn.

GitHub is the largest open-source platform in the world. A considerable amount of companies use it for their work. So, because of that, Saad announced that in DSC every member would be working on GitHub. Also, every member will be invited to an organization — Developer Student Club - UET, where they will work on their projects. Through this step, Saad is aiming to teach students how to collaborate on a project using GitHub.

The next thing Saad did was that he explained to the audience what the mission of the DSC is. He told them that this mission is given to him by the Google Developers itself. He quoted:

"To provide native app and web development skills to students to help them work towards employability."

🧐 Why Google started this initiative?

After this, Saad took all the students to the past. He said, "You guys should know why Google started this initiative in the first place so you have a clear image of this program." He shared with the audience some history that Google first launched this initiative in 2017 in India to solve the problems university graduates were facing in terms of getting a job.

Saad also said that as it is a Google program, so google will be providing DSC all the learning resources. By using these resources, students will learn new technologies. And this learning will help them in the long run when they will be searching for a job or starting their own software firm.

🚀 Why students should apply for the DSC membership?

Often it happens that we weigh the pros and cons of something before getting into it. To make it easy for the students, Saad put some pros in front of them. Like by becoming a part of the DSC, students will be able to

Because students were still new to this Google community, Saad further explained to them about the Global Solution Challenge that is going to take place in early January, next year. He explained to them that in this challenge we will be doing a project that will help our local or underprivileged community in some way.

Later in the session, Saad also introduced his core team that will help him lead. This team will assist him in areas like public relations, graphics, management, etc. He announced the name and designation of his core team members as follows:

Concluding this info session, Saad announced that the recruitment drive for the DSC has opened. Students who are interested should apply. No prior experience is required. He also defined criteria that the form is only weighing 30% in the selection. The rest of the 70% will be evaluated during the interview.

With the recruitment drive, Saad concluded the info session and asked the audience if they have any questions. A final year student had a query related to how DSC will help the local community. Saad presented her with a scenario that let's say we are doing a project related to some issue raising website for the local community. Some of the members of the DSC, who have expertise in making the front-end can make the UI of the site. Some members can work on the backend of the site. These two groups will work together on the project on the DSC UET GitHub organization.

The session was a success overall. More than 200 students applied in the DSC UET recruitment drive. Now, let's see where this exciting journey will take them. 🙌

🙌 We would love to hear from you

Use the form below to ping us.